A weak disturbance arriving from the north/northwest will bring high elevation snow showers and low elevation rain showers to the Interior on Friday and to a lesser extent on Saturday. Warmer and drier conditions will return on Sunday and Monday, then the pattern will start to turn more active over the middle to latter parts of next week. This will be my final forecast of the 2019-2020 season. Thanks so much for reading this winter and for bearing with us during the recent COVID-19 craziness. I hope you all have a fun, safe and healthy summer!

Sadly, many will remember the 2019-2020 season for its early demise in mid-March due to COVID-19. However, before the pandemic hit, this turned out to be a good season for most of BC. The Interior, in particular, has had an above-average snow season across the board, while snowfall has been near to slightly below average across the Coast Range.

Here is a look at snowpack relative to average as of April 1st, which is the standard date for evaluating season snowpack before spring melt-off occurs. 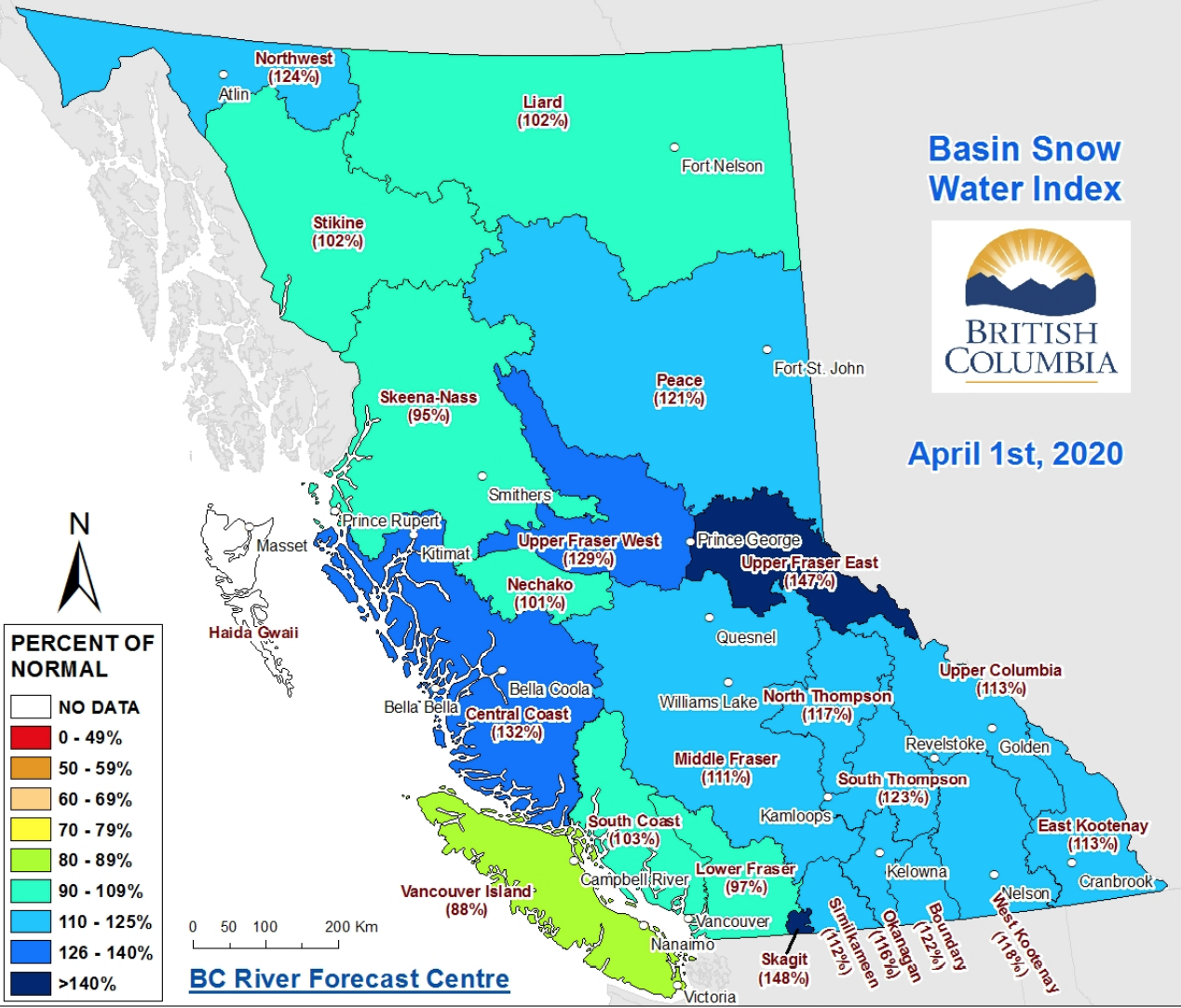 The Columbia Mountains, Kootenay Region and eastern areas near the Alberta border all did very well this winter, as did the Northern Interior. Revelstoke, in particular, had a great winter with more consistent snowfall than most areas. They were actually on pace to have one of their best snow years on record before the resort closed early in mid-March and snow reports ended.

Interestingly enough, one month in particular (January) was largely responsible for the season being a “success” as a whole, whereas snowfall was more variable during the other months.

Here is a more detailed monthly look at how the snow season progressed.

November was drier than average for most of BC as a stubborn ridge of high pressure dominated the pattern. In early December, the pattern turned snowy across much of the Interior while the Coast Range stayed dry through the first half of the month.

A more consistent and snowy pattern developed across all of BC during the second half of December. By the end of the month, snowpack across the Coast Range was well below average as the dry start had taken its toll, but snowpack was above average across much of the Interior, especially around Revelstoke.

While some areas had a slow start to the season, January came in like a lion and was insanely snowy across all of Southern BC with new snow falling nearly every day at many areas.

Whistler had an incredible January after its dry start to the season and received a total of 470 cm (185”) during the month. The Interior saw plenty of snowfall as well, and Fernie received the deepest January total of all Interior areas with 394 cm (155”).

The weather pattern turned quieter and more variable during February, and snow amounts were much lower across most areas compared to January. There were a few exceptions, mainly across the Okanagan region and Eastern Coast Range, where Apex, Big White and Manning Park ended up having good months.

There were a couple of good storm cycles in March interspersed with drier periods. Overall, precipitation was below average across most of the province, but temperatures were also colder than average, so the snowpack percentages relative to average saw little change from previous months.

April has been quite dry so far with periods of warmer temperatures interspersed with cooler temperatures. Of course, all ski areas have been closed and backcountry skiing is highly discouraged or banned in some areas, so there hasn’t been much spring skiing going on.

Thanks to the mid-winter storms and the relatively cool to in some cases near-average early spring temperatures, the snowpack is in good shape for most areas heading into the snowmelt and runoff season.

While a ridge of high pressure remains parked off the coast of BC, a disturbance is sliding in from the north/northwest and will bring rain and snow showers to the Interior and portions of the Coast Range on Friday.

Later Friday night and into Saturday, mountain winds will shift to east/northeast, which will keep rain/snow going across the East Purcells and BC/Alberta border region through Saturday afternoon.

Freezing levels will rise to 1,800-2,200 meters across the Interior on Friday afternoon, before falling to 1,100-1,500 meters on Friday night and remaining around these levels through Saturday where precipitation continues to fall. Elsewhere, things will start to warm back up and dry out on Saturday.

Snow amounts from this system will generally range from 1-8 cm (0.5-3”) across the higher elevations of the Interior as well as along the eastern slopes of the Coast Range. Across the more-favored East Purcells and BC/Alberta Continental Divide region, snow amounts will range from 5-15 cm (2-6”).

Dry weather will return to all areas on Sunday and Monday along with warmer temperatures. Another weaker system will then arrive from the west/northwest later on Tuesday and into Wednesday, bringing more rain/snow showers to Southern BC along with cooler temperatures.

We should dry out briefly following the mid-week storm next week, but then we should start to see a more substantial pattern shift as the blocking ridge of high pressure that has been in place finally starts to break down, opening the door to a stronger Pacific trough of low pressure with more frequent storm systems likely to follow.

This pattern change looks to occur in about a week from now (on 4/24 or 4/25), so next weekend is looking colder and more active at this time.

Thanks again for reading the British Columbia Daily Snow this winter!

Hopefully, things start to trend more toward normal this summer with fewer restrictions on outdoor recreation. I hope everyone has a great summer and we’ll ski you next season!

As we begin to transition into hiking and biking season, check out OpenSummit, our summer service that provides precipitation, lightning, temperature, wind, and cloud cover forecasts for over 1,000 locations across the United States.

Also, ONE login and ONE subscription is all you need to see the All-Access features on BOTH OpenSnow and OpenSummit. Click HERE for more details.